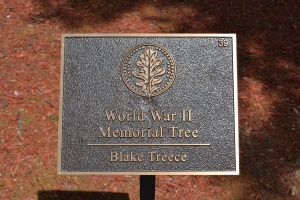 Treece lived in Bear Creek, Searcy, Arkansas. He attended the Arkansas State Teachers College for three years. His parents were Blake Arthur Treece and Virginia Lee Hendrix. Virginia L. Treece was his sister. He never married or had children.

He died of Foreign Object Damage on August 8, 1944, and was originally thought to be Missing In Action or Buried At Sea. He was commemorated on the Tablets of the Missing at Brittany American Cemetery, St. James, France. His remains were found and were then buried at Marshall Cemetery in Marshall, AR.