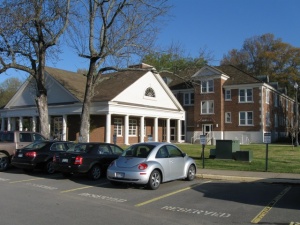 The 30,000 square foot hall was constructed in 1934 with the assistance of the Public Works Administration. It is named for Arkansas state senator Otis T. Wingo, and originally used as a women's dormitory. The hall was extensively refurbished under the direction of Stocks-Mann Architects around 2005 and a new addition and entry porch was added to the back side of the building.