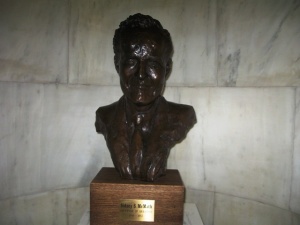 Sidney Sanders McMath served as Democratic governor of the State of Arkansas from 1949 to 1953.

McMath was a member of the U.S. Marines during World War II. He was a veteran of Guadalcanal, and the Solomons and Bougainville campaigns. Upon his return from war McMath opened a law office in Hot Springs, Arkansas. He served two years, from 1946 to 1948, as chief prosecuting attorney in Garland and Montgomery counties before launching a successful campaign for the Governor's Office on a platform of better highways and educational institutions. Under his stewardship Arkansas added 2,300 miles of paved highway using funds made available by a $28 million general obligation bond issue passed by the state's voters in 1949.

McMath campaigned unsuccessfully for a third term as governor after allegations of improprieties in the awarding of state construction contracts in return for party kickbacks.

McMath was born in rural Columbia County, and was a graduate of the University of Arkansas at Fayetteville.