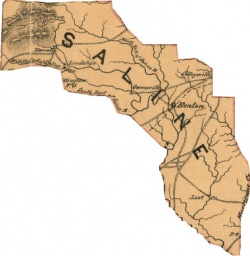 Saline County was established on November 2, 1835. The county is famous for its rich mineral resources. Early salt works in the county supplied the precious mineral to places throughout the mid-south. Bauxite was discovered in 1887, and the American Bauxite Company quickly bought up ninety percent of the deposits. The company built a large reduction plant at Bauxite, Arkansas, and shipped the resulting ore out of the state for further refining and smelting. Other smaller players were Republic Mining and Manufacturing Company of Little Rock, Globe Bauxite Company of Chemical Spur, and the Du Pont Chemical Company. In the 1920s it was thought that seventy percent of the world's supply of the mineral was locked up in geological formations located in Saline and Pulaski counties between Benton and Little Rock.