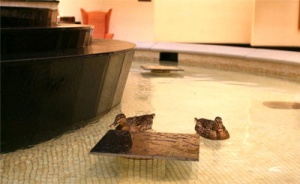 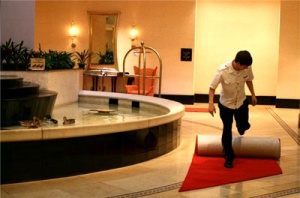 A hotel worker rolls out the red carpet at 4:30 in preparation for the evening promenade. Photo by Casey Gambill. 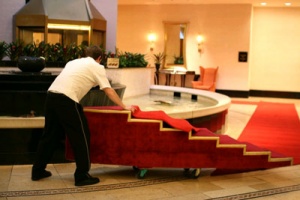 The Duck March culminates with a short climb into the fountain. Photo by Casey Gambill.

The Peabody ducks are a tourist attraction in the main lobby of the Peabody Hotel in Little Rock, Arkansas. The ducks ride a glass elevator to and from the the lobby fountain where they paddle around during the day. The ducks follow a red-and-gold jacketed "duckmaster," holding a brass cane with a head shaped like a duck, up and down a "duck stair" and along a red carpet in a twice daily "duck march." The ducks march to the fountain at 11 AM, and return to their roost in the Royal Peabody Duck Palace at 5 PM. The march is accompanied by John Philip Souza's "King Cotton March."

The tradition began in the Memphis Peabody Hotel in the 1930s when general manager Frank Schutt and friend Chip Barwick, Sr. placed live decoy ducks in the hotel fountain.