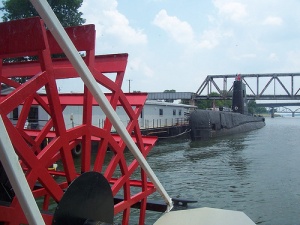 The Arkansas Inland Maritime Museum is located along the riverfront in North Little Rock, Arkansas. The centerpiece of the museum is the USS Razorback (SS-394) a decommissioned Balao-class submarine built for the United States Navy. Also present at the entrance to the museum is the USS Snook (SS 279) Memorial. Motor Vessel Lipscomb of the Arkansas River Maintenance Fleet is regularly moored at the museum by special arrangement with the U.S. Army Corps of Engineers.

The museum is currently in the process of bringing the firefighting tugboat USS Hoga (YT 146) - present at the Japanese attack of Pearl Harbor - to North Little Rock. The museum is also considering an offer to place the destroyer USS Orleck (DD-886), currently moored at the Southeast Texas War Memorial and Heritage Foundation site on Levingston Island in Orange, Texas.

The museum opened as a nonprofit on May 15th, 2005. The museum's address is 120 Riverfront Park Drive.