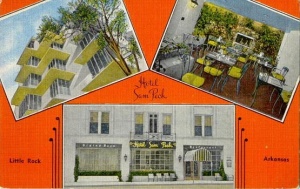 Postcard for the Hotel Sam Peck.

The Hotel Sam Peck was the name given to a hotel that began life as the Hotel Freiderica at the corner of Capitol Avenue and Gaines Street in Little Rock, Arkansas. The hotel was established in 1913, and became known as the Sam Peck in the 1930s.

The hotel was purchased by Sam Peck and Henrietta Peck of northwestern Arkansas in 1935. An art deco annex was constructed by Edward Durrell Stone in 1938. Forty-nine more rooms were added in a 1960 expansion.

In 1984 the hotel was remodeled and renamed the Legacy Hotel and Suites. The address of the hotel is 625 West Capitol Avenue.