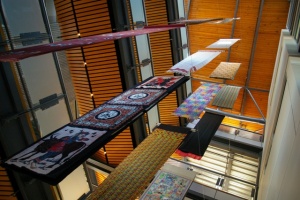 Tapestries hang from the ceiling inside the Heifer International headquarters building. Photo by Victor Frana. 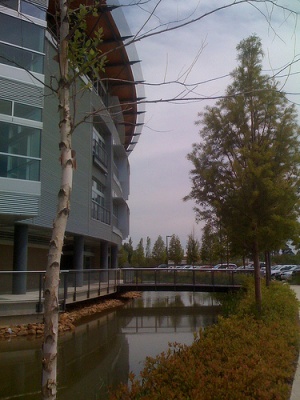 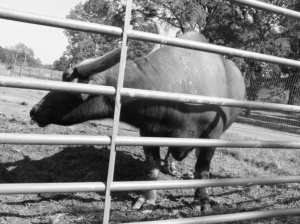 Water buffalo at the Heifer Ranch in Perryville, Arkansas. Photo by Megan Davari. 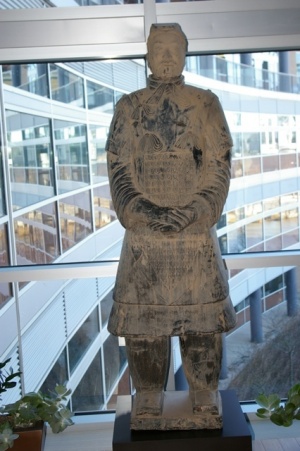 Heifer International is a non-profit organization founded in 1944 by Indiana farmer and Church of the Brethren educator Dan West. Heifer's website states that although past programs have benefited from the support of religious organization (i.e. mission trips), it has no specific religious affiliations. The current chief executive officer of Heifer International is Domingo Barrios.

Heifer currently has 350 projects in 55 countries. This number includes the US, which receives assistance in 28 states. Last year's local projects included helping Hurricane Katrina victims and providing earthworms, chickens, and other animals to gardens in Little Rock, Arkansas.

The majority of the work that Heifer does involves bringing animals into a struggling community. Heifer volunteers show locals how to take care of the livestock in hopes of changing populations from the ground up. Animals included in the program are alpacas, bees, rabbits, and water buffalo.

New work sites are chosen based on factors such as viability, location, area stability, and accessibility to Heifer workers. Taking these factors into consideration, the organization reviews the site to measure the likelihood of success. Once a site has been established it takes between six months and two years before any animal is actually delivered. In addition to sites worldwide, twenty-five states in the United States also receive assistance from Heifer.

Heifer International focuses on many different countries in the hope that they can grow and learn to thrive on their own. The main aspects that Heifer targets are: agroecology, animal well-being, gender equity, HIV-AIDS, microenterprise, urban agriculture, and young people’s initiative.

Agroecology: This is the prolonged use of natural resources. The Heifer International describes it as “a healing touch for our planet that helps reduce our environmental footprint, the impact each one of us makes.” Heifer wants to bring long-term use to communities. Animal Well-being: Locality is a big part of animal well-being. By looking at where a community is located, Heifer determines what kind of training would best aid them. Heifer International uses a program called Community Based Animal Health Care to provide additional assistance to select people.

Gender Equity: Heifer seeks to show value to all people: women, men, girls, and boys. An example of how Heifer International enables people to see the importance of gender equity is through a program called WiLD, Women in Livestock Development. The Heifer website provides more information on this program.

HIV AIDS: Proper nutrition is important to survival—with or without AIDS. Since the epidemic causes families to lose important, hard-working members, Heifer helps provide nutritional aid to them. They also feel it is important to bring greater understanding to people about AIDS.

Microenterprise: These programs build on unique skills that people have in given areas. A small loan is provided that will not gain interest. This gives families a chance to use their ingenuity to start a business that will expand and provide great benefits. A couple of examples are given on the Heifer website that demonstrates how microenterprise has helped people.

Young People’s Initiative: This is just what it sounds like. Since poverty is not restricted to adults, Heifer seeks to offer young people skills, tools, and opportunities that will benefit them a lot. They need to be given the resources to thrive and create a better lifestyle.

The first Heifer headquarters was located in St. Louis, Missouri. The nonprofit was originally called, and is still sometimes identified as, Heifer Project International. In 1971 the nonprofit moved its main operations to Arkansas, making its home at 1015 Louisiana Street in Little Rock.

Heifer moved into its current headquarters building near the Clinton Presidential Center in March 2006 as part of an effort to revitalize downtown Little Rock by creating a proposed international non-profit business corridor. Said Heifer VP Tom Peterson, "We would not have built here if it were not for the library." The Heifer corporate headquarters building cost $17.5 million, and occupies a 26-acre site. The Heifer groundbreaking ceremony took place on October 29, 2003.

Heifer's 94,000 square-foot Little Rock headquarters is the first platinum-rated building in Arkansas under LEED certification standards. This is a notable achievement as less than fifty ecofriendly buildings hold this honor in the United States. Most of the steel in the building comes from recycled stock, as does the material for carpets, countertops, and bathroom stalls. The building is insulated with locally-produced soybeans and cotton. Ceilings on the fourth floor are made of locally-grown Mississippi Delta pine. Arkansas limestone is used for exterior cladding. Rapidly replenishing bamboo flooring substitutes for less renewable wood. Raised flooring is used to maximize the savings in heating and cooling. The entire building is only sixty-two feet wide, which allows natural sunlight to reach every workspace.

The site of the Heifer International headquarters is a reclaimed industrial brownfield. The site was prepared by removing 75,000 tons of contaminated soil. Bricks reclaimed from previous demolition on the site were used to create walkways and the entrance drive. Native grasses and other plants reduce erosion, and graveled parking areas contain runoff. Stormwater is directed first into a retention pond where it seeps through a sand filter and is collected in artificial bio-swales that surround the entire building. Clean rainwater from the roof is directed into a golf-tee shaped cistern tower visible near the center of the north side of the building. Water from the cistern is used to cool the building and flush toilets.

In 2007, The American Institute of Architects Committee on the Environment selected the Little Rock Headquarters as one of Top Ten Green Projects of the year. In January 2008 the Heifer headquarters received one of thirteen prestigious Institute Honors Awards for Architecture. Reese Rowland at Polk Stanley Yeary Architects designed the award-winning building, and CDI Contractors built the headquarters. Visitors can take a green building tour for free from Monday through Friday at 11 AM and 3 PM. Group tours take place on Tuesdays and Thursdays at 10 AM.

Heifer International is in the process of adding an additional hunger educational facility to its Little Rock headquarters. The Murphy Keller Education Center is a $13.5 million project slated for completion in 2009. A proposed Global Village on the site is not yet under construction.

The Heifer Ranch is in Perryville, Arkansas.