Difference between revisions of "Hatchet Hall" 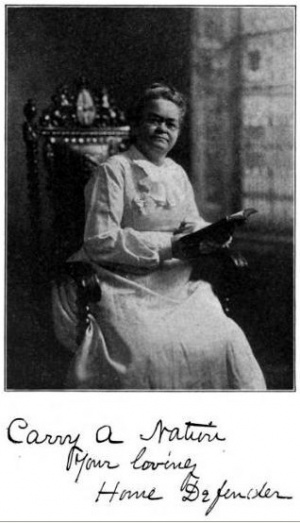 Hatchet Hall appears to be a very old and rickety house. It serves as temperance landmark located at 35 Steele Street in Eureka Springs, Arkansas, that was once the home of Carry Nation. Carry Nation was a temperance crusader who was famous for "smashing" – that is vandalizing saloons and places that commonly served alcohol. Nation was said to have used a machete, thus it earned the name Hatchet Hall.

Hatchet Hall was home to Nation for two years, during which time she also used the home as a boarding house for widows, women who had been abused, and girls in college. Most of Carry Nation's passion for temperance came from her religious philosophy, which she shared with those who lived in her house. Bible teaching and song services were commonly heard.

After Nation suffered a nervous breakdown, the house became the residence of Elsie and Louis Freund who were artists. If not for the Freund's purchase, the house would have been destroyed and sold for wood. Hatchet Hall then became the Art School of the Ozarks from 1940 to 1951, where the Freunds would teach art classes in the summer. After the Freunds left Hatchet Hall, it became a museum to both Nation’s life and her passion – temperance.

Currently, the house is a landmark but is inaccessible to the public. It is not really a place people will vacation to see on its own anyway; however, it is closed nonetheless. Most locals have little interest in using the place, but there has been no effort to have it torn down, being that it is a historic site.

And it's a very nice house.