Difference between revisions of "Great Depression" 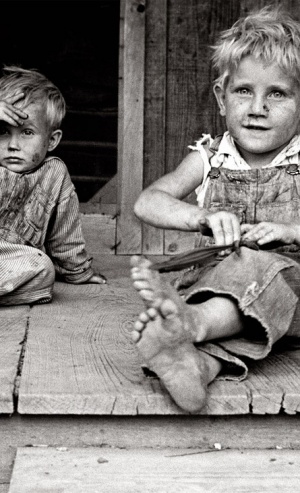 Sharecropper's children on the Maria Plantation.

The Great Depression in central Arkansas began with a drought in the summer of 1930 that extended into the spring of 1931. The situation got so desperate by August 1930 that unemployed Lonoke-area farmers shot at members of a black road construction gang. In January 1931 the town of England experienced a bread riot. Meat became particularly scarce. Arkansans hunted for wild game, and in their anger at the president spoke of rabbits as "Hoover hogs." The cotton crop for the year dwindled from 1.4 million bales in 1929 to only 879,000 in 1930. The corn crop withered down from 29 million bushels in 1929 to 8.3 million in 1930.

Compounding the situation, Arkansas had borrowed heavily in the 1920s to build its system of state highways. In the 1930s Arkansans held the most per capita road debt of any state in the Union.

In 1931 the American Exchange Trust Company, the largest bank in the state, failed.

Arkansas and the New Deal

Between 1933 and March 1938 the New Deal agencies organized by the Roosevelt administration pumped more than $279 million dollars into the state.

In June 1933 the president created the Public Works Administration (PWA). The PWA assisted in the construction of a number of buildings on the campus of UCA, then known as Arkansas State Teachers College, under the School Building Aid Program:

Other PWA projects in central Arkansas:

Roosevelt announced the creation of the Civil Works Administration (CWA) on November 8, 1933. By December 1933 more than 58,000 people had CWA jobs in Arkansas. The leader of the CWA in Arkansas was R. C. Limerick, the former chief engineer of the Arkansas Highway Department.

The Works Progress Administration (WPA) was created in April 1935. By July it was distributing benefits in Arkansas, hiring workers, and organizing various projects. The state's WPA supervisor was William Reynolds Dyess until his accidental death in January 1936. He was succeeded by a subordinate, W. Floyd Sharp. WPA activities ended in the state in 1943, having spent $117 million dollars.

A number of U.S. Post Office murals in Arkansas were painted by artists hired under the Treasury Department's Section of Painting and Sculpture. Richard Sargent painted "Men at Rest" (1939) for the Morrilton office.

In 1935-1936 hunger among Arkansas sharecroppers became national news. The Agricultural Adjustment Act of May 12, 1933 was passed to encourage farmers to reduce farm production by paying them to withhold production.

The Southern Tenant Farmers' Union (STFU) organized in response to the aims of the AAA.

In January 1936, thirty-two schools in Pulaski County were closed due to the financial crisis. On June 10 of that year, President Roosevelt traveled to Little Rock to quell fears and celebrate the Arkansas state centennial. He spoke to a large crowd at the Arkansas State Fairgrounds and then dined at the home of Senator Joseph Taylor Robinson.

The population of the state declined over the last five years of the 1930s in response to hard times. About 179,135 left for greener pastures, some 31,432 bound for California. Black migration in the decade was relatively light. Only 26,048 who left the state were African American.

Arkansas did not emerge from the Depression until the start of World War II, which pumped an additional $245 million in funding for military facilities into the state.