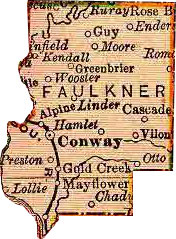 Faulkner County was established on April 12, 1873, from lands taken from Conway and Pulaski counties. The county is named for "Arkansaw Traveler" Colonel Sanford C. Faulkner.

Faulkner County comprises 647 square miles of territory. The county is characterized by several notable lakes, as well as hilly uplands and marshy lowlands. The Arkansas River flows along part of the western edge of the county.