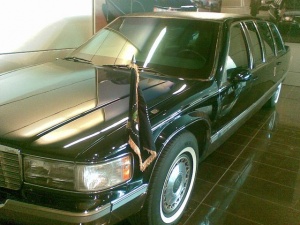 By far the most popular attraction at the Clinton Presidential Center is the 20,000 square feet of museum exhibits. "The museum was especially important to me," wrote Bill Clinton in his autobiography My Life, "because I wanted to show visitors from across the county and around the world that political ideas, policies, and decisions have real consequences to their lives and therefore that public service and well-informed citizens are as essential to America in the twenty-first century as they were at the time of our founding."

Patrons must pass through an elaborate security procedure when entering the museum at the south end of the main Library building, then pass a large circular reception desk and Clinton's bulletproofed 1993 Cadillac Fleetwood limousine en route to an escalator to the main and upper level exhibition spaces. A special services desk is also located on the ground level. Visitors are reminded to first visit the 80-seat orientation theater, which includes an endlessly repeating film documenting Clinton's life and work.

Gigantic cherry bookcases housing about three percent of all Clinton administration papers frame 20,000 square feet of museum space found on the main and upper levels. The bookcases are modeled after those Clinton admired in the Long Room of Trinity College Library in Dublin, Ireland. Clinton visited the library while studying as a Rhodes Scholar. One hundred and ten feet of oversize interactive displays designed by Ralph Appelbaum Associates stand at angles in the center of the exhibit space. The displays are surrounded by thirteen policy alcoves also created by Appelbaum.

The upper level features the Life in the White House exhibit, the Music Room, a temporary exhibit room, and a scale model of the Oval Office painstakingly recreated by Kaki Hockersmith. The east side of the mezzanine includes displays on state events, including a photo log of one visit by Vaclav Havel and his wife Olga Havlova. There are also displays of sports memorabilia, holiday activities at the White House, family celebrations, five saxophones from Bill Clinton's collection, and arcana on Socks and Buddy (presidential cat and dog). A monitor playing the twenty-two minute video "A Time to Laugh" with outtakes of funny moments real and imagined during the presidency draws large crowds. The west side of the mezzanine has display cases with early photos of Bill and Hillary Clinton, a crayon drawing of a scene from the movie "High Noon" (the president's favorite), scout and pep band badges, and Clinton's Boy's Nation speech. There are cabinets covering Bill Clinton's time at Georgetown, working in the offices of J. William Fulbright, his meeting of Hillary, and various Arkansas political campaigns. The last display case in the series contains photos and mementos from the collection of Hillary Clinton.

The Clinton Foundation houses some 77,000 artifacts on site, though only a fraction are on exhibit at any given time. The collection includes 50 saxophones and a 1967 model Ford Mustang like that driven by the president in his youth. Eight military cargo planes moved all of Clinton's memorabilia, papers, and other media from Washington, DC, to Little Rock in 2001.

The current charge for visiting the museum exhibits is $7 for adults.