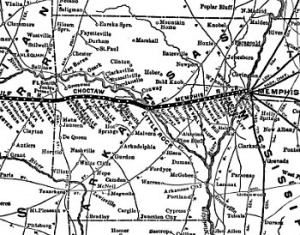 Route of the Choctaw, Oklahoma and Gulf Railroad, Choctaw and Memphis Railroad through Arkansas.

The Choctaw, Oklahoma & Gulf Railroad was incorporated by act of Congress in the late nineteenth century. The firm began life as the Choctaw Coal and Railway Company, and was taken over by the Choctaw, Oklahoma & Gulf Railroad in 1894. The first stretch of rail laid by the company, between McAlester and Oklahoma City, Oklahoma, was finished by October 1895. An extension from El Reno west to Weatherford, Oklahoma, was finished in 1898. In 1898 the company purchased the Memphis and Little Rock Railroad, which eventually led to the connection of Memphis to Oklahoma through Little Rock. In Little Rock the railroad owned the Choctaw Freight Depot, the Choctaw Railway Station for passengers, and what is now called the Rock Island Railway Bridge over the Arkansas River. On April 1, 1904, the railroad was sold to the Rock Island Railroad.