Difference between revisions of "Barton Coliseum and State Fairgrounds Complex" 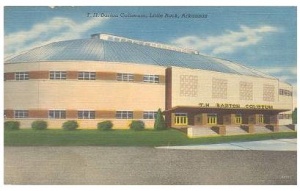 The UALR Trojans basketball and Arkansas GlacierCats ice hockey teams once played home games in the arena. The Trojans later played in ALLTEL Arena before moving to the Jack Stephens Center in 2005. The coliseum has played host to Sun Belt Conference basketball tournaments on three occasions. Barton Coliseum is currently home of the Arkansas Impact basketball team.