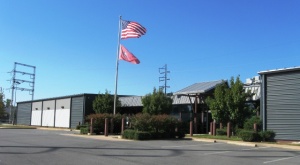 Former home of Balch Motors, now a warehouse for the Department of Arkansas Heritage. Photo by Phil Frana.

Balch Motor Company is a former Oldsmobile dealership at 1000 La Harpe Boulevard in Little Rock, Arkansas. The dealership was established by Fred Balch in 1936 on Broadway in the downtown district. The dealer later moved to the corner of Chester and LaHarpe streets.