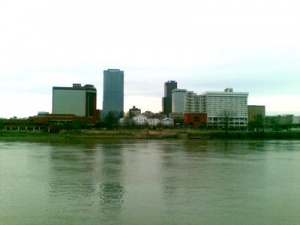 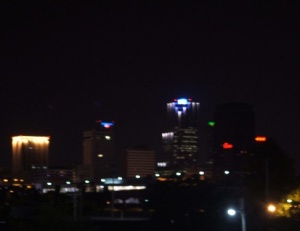 The City of Little Rock is an incorporated municipality in Pulaski County, Arkansas. The city is the political and commercial center of the state.

City government is divided into a number of city departments, citizen services offices, commissions, bureaus, and task forces. Little Rock is led by the Mayor's Office, the City Manager's Office, and the Board of Directors. Services provided by the City of Little Rock are funded by a series of bonds, and accomplished by approximately 2,500 employees. The city has an extensive municipal code. City Hall is located at 500 West Markham Street.

Little Rock is located on the western edge of the alluvial plains of the Arkansas Delta where the Ouachita Mountains end. The city sits on an elevated bluff on the southern side of the Arkansas River, which generally protected it from flooding in its early history. The city sits at an elevation of about 257 feet above sea level. 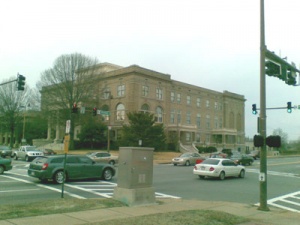 The City of Little Rock operates out of City Hall. The building once had a dome. Photo by Phil Frana.

The City of Little Rock has fourteen departments dedicated to four areas of service: public safety, infrastructure, economic development, and quality of life.

Little Rock is the capitol city of the State of Arkansas. The city encompasses 122 square miles of incorporated land. In 2003 the U.S. Census Bureau estimated population of the city was 184,053, with 55.1% Caucasian, 40.4% African American, and 2.7% Hispanic. More than half a million people live in the Greater Little Rock Metropolitan area.

The city is known for six important downtown bridges over the Arkansas River connecting the city to North Little Rock and northern Pulaski County. The six bridges are the Baring Cross Bridge, Broadway Bridge, Main Street Bridge, Junction Bridge, I-30 Bridge, and the Rock Island Bridge. Other bridges in the city that connect the north and south banks of the river are the I-430 Bridge, the pedestrian-only Big Dam Bridge, and the I-440 Bridge.

The city lies at the intersection of two major interstates, I-30 and I-40. East-west crosstown traffic is facilitated by I-630. The city is ringed on the west by I-430 and on the east by I-440. Interstate 530 connects the city to Pine Bluff to the south. Two other limited access highways are U.S. Highway 67, connecting Little Rock to Jacksonville to the northeast, and Arkansas Highway 100, connecting the city to Maumelle to the northwest.

Little Rock is served by several railroads. The Union Pacific Railroad enters downtown by way of two separate lines entering the city from the northeast, northwest, southeast, and southwest. Amtrak uses the northeast-to-southwest line for passenger traffic, stopping at Union Station near the Arkansas State Capitol. The Little Rock and Western Railway follows the Arkansas River downtown from the direction of Bigelow in Perry County.

The Woodland period Plum Bayou people settled in this part of the Arkansas River valley around 650 AD. The original name of the inhabitants is unknown; the name Plum Bayou is derived from a nearby creek. Remains from this culture are still visible at the Toltec Mounds Archeological State Park sixteen miles southeast of the city near Scott. The Plum Bayou culture occupied the Toltec Mounds site until 1050 AD, when they were abandoned.

The Quapaw (Ugahxpa, or "Downstream People") are a Native American tribe that may have migrated from the Ohio River Valley to the Lower Mississippi and Arkansas River valleys before the time of European settlement. Other native peoples referred to the Quapaw as the "Akansea," from which the name of the state of Arkansas is derived.

The site of the present city of Little Rock was first visited by European explorers in 1722, when Frenchman Jean-Baptise Bénard de la Harpe made note of La Petite Roche ("the little rock"). The first squatter on Little Rock land may have been William Lewis, who built a shelter at the present location of the Old State House in 1812.

On August 24, 1818, the Quapaw Indians ceded all their lands west of present Rock Street in Little Rock to the United States in preparation for a move of the seat of government to the city from Arkansas Post near the mouth of the Arkansas River. The loss of land amounted to 16 million acres in southern and western Arkansas, including almost all land held between the Arkansas and Red rivers. That same year Pulaski County became part of the Missouri Territory. The city gained a post office on April 10, 1820, with the appointment of postmaster Amos Wheeler, and became the territorial capitol on October 24, 1820. Little Rock was surveyed in 1821, and briefly became known as "Arkopolis." The first Little Rock school opened under Jesse Brown in 1823.

On November 15, 1824, the Quapaw tribe ceded the remainder of their lands east of Rock Street, an amount totaling 1.5 million acres. A Quapaw Line monument dedicated to the memory of these two treaties stands today on the southeast corner of Commerce and Ninth streets. 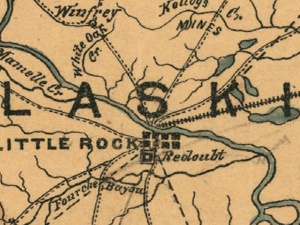 During the American Civil War the city observed much military activity. On February 8, 1861, the Federal Little Rock Arsenal was attacked by Confederate forces and its store of ammunition, cannon, and other weapons seized. Under the leadership of Major General Samuel R. Curtis 22,000 Union soldiers feigned an attack on Little Rock in May 1862, causing the state to establish a government in exile in Jackson, Mississippi.

The city was captured in September 1863 by fourteen thousand federal troops under the command of Major General Frederick Steele. C.S.A. Major General Sterling Price attempted to defend the city with eight thousand men and miscellaneous cavalry. Steele bypassed this installations by crossing the Arkansas River on a pontoon bridge erected at Terry's Ferry. Confederate cavalrymen under the leadership of Brigadier General John Sappington Marmaduke met Union cavalry under Brigadier General John W. Davidson at Fourche Bayou east of the city (site of the present Port of Little Rock). The Confederate stand at Fourche Bayou gave Price time to evacuate all of his troops before the city surrendered for the duration of the war.

A City of Roses 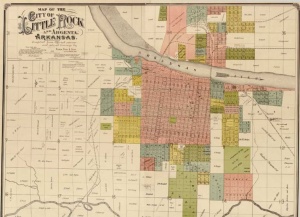 Little Rock and Argenta with additions, extensions, and subdivisions in 1888.

At the turn of the century Little Rock was called the "City of Roses," for its long tradition of civic gardening. In 1914 the Arkansas State Capitol was completed in midtown Little Rock, precipitating a building boom that culminated with the completion of the fourteen-story Donaghey Building in 1926. Downtown retail development, spurred by flagship stores Blass Department Store and M. M. Cohn, grew until 1957 when the first suburban shopping center (Village Shopping Center) opened its doors at the corner of Asher & University. 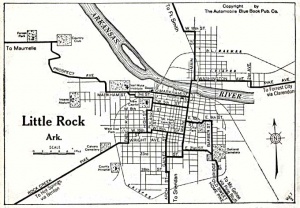 Little Rock had long been controlled by the mayor-alderman form of government. On November 11, 1957, voters turned control over to a city manager. Local historian James Bell has suggested that the change was made in part because of the turmoil roiling the city during the Little Rock Crisis: "Possibly because of state intervention in the Little Rock school crisis, which in turn caused Federal intervention, the city's voters favored a stronger municipal government."

The City of Little Rock has taken a number of steps since the 1960s to restore downtown to its former position of prominence and hospitality. The city has focused on some of the same goals driving other revitalizing cities like Portland, San Antonio, and Baltimore. These goals include improving the quality and number of downtown entertainment venues and attractions, adding green space buffers, beautiful streetscapes, and waterfront attractions, improving walkability and transportation options, creating safe living spaces for a twenty-four hour resident population, revisiting zoning laws, and not least of all forging significant public-private partnerships and cooperative ventures.

Redirecting attention back downtown has not been easy. In an attempt to recapture some of the trade draining into the western suburbs the group Little Rock Unlimited Progress inaugurated the ill-fated $4.5 million Metrocentre Mall which replaced Main Street from Third Street to Seventh Street with a brick-lined pedestrian mall in 1975. More successfully in 1982 the Statehouse Convention Center opened near the corner of Main and Markham next to the new Excelsior Hotel. The shuttered Capital Hotel reopened after $10 million in renovations the very next year. Also in 1983 the Little Rock Department of Parks and Recreation opened the $2 million Riverfront Park, an idea on the drawing board since 1914, and kicked off the inaugural Memorial Day weekend event known as Riverfest. By 1988 the city hosted 600 conventions and 220,000 visitors due in no small part to the efforts of downtown city leaders.

The apparent success of Metrocentre Mall encouraged investors to sink $13 million into city revenue bonds to fund the Main Street Market project, which brought an enclosed shopping center to the downtown district in 1987. Five buildings were connected along Capitol and Main streets to form an indoor mall. The oldest escalators in the state, once owned by JCPenney, were refurbished as well as 177,000 square feet of office, restaurant, and retail space. Main Street Market was connected to the Arkansas Repertory Theatre and a parking deck by skywalks. Within four years, however, the Market failed as a retailing and entertainment destination. Today it is exclusively used as office space. Metrocentre Mall failed as well. Main reopened to vehicular traffic around 1995. Barry Travis, former executive director of the Little Rock Convention and Visitors Bureau, has blamed a lack of free parking as a major reason for the decline of both revitalization efforts. The 1994 HBO documentary Gang War: Bangin' in Little Rock also reinforced the public imagination of downtown as an unsafe destination. Much of the east side was composed of aging or derelict warehouses.

A "critical mass" may only have been reached in 1996 when Ottenheimer Market Hall reopened in the River Market District to great fanfare. The Market Hall almost immediately helped renew retail opportunities and bring nightlife back into the city center. By 2001 the city was hosting 700 conventions and 300,000 visitors who spent an estimated $100 million. A five-year effort to site the William J. Clinton Presidential Center in the city was capped by the 2004 dedication of the Clinton Library, bringing an estimated $1 billion in additional investment into the historic River Market District.