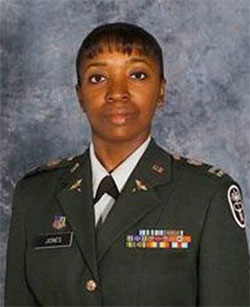 Captain Gussie M. Jones was born in Forest City, Arkansas and graduated from Palestine High School in 1981. Then, in 1986 she attended the University of Central Arkansas.

Jones joined the U.S. Army in 1988. After being selected for the Enlisted Commissioning Program at Syracuse University, she graduated from the program both as a registered nurse and second lieutenant. She served on the staff of the 31st Combat Support Hospital as a critical care nurse in Baghdad, Iraq. Her service spanned over 15 years.